You are here: Home / Uncategorized / The Cure 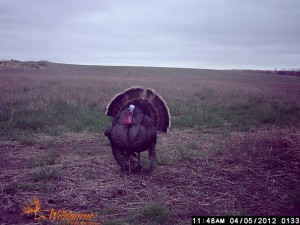 I would venture to guess that every hunter experiences the same feelings come mid to late February through mid March. You may feel bored, lost, sad, lonely, useless, or like you have no purpose in life.  There is no more muley stalking, no more upland bird pointing, no more elk packing, and no reason to drag your decoys to the water’s edge. At best, there are glimmers of happiness in the form of predator calling if you can find the time. It’s the dreaded stretch of dark nothingness following the fall/winter seasons. Now the good news; you are almost through this dark time in your life and you can see the light on the horizon. That light is the sunrise cresting the hills with the sounds of turkey coming out of roost and toms gobbling. Everyone get your game face on, spring turkey season is upon us! 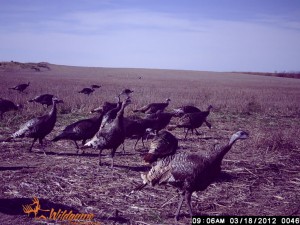 I grew up fifteen miles from anything that resembled a town in the middle of nowhere, NW Kansas. To be more exact, I grew up in a valley that followed a creek bottom through an otherwise flat area of the county. This small part of the county held several very large groups of Rio’s. It wasn’t out of the ordinary on a spring or fall day to see groups in the hundreds. Hundreds with an “s” (I have actually stopped to count them). I spent my years growing up hunting deer, coyotes, and pheasants, all of which were very plentiful. For whatever reason my brother Travis and I never once bothered to get a turkey tag. As a matter of fact until I started hunting turkey just a few years ago, I had only been along on one afternoon turkey hunt to assist a friend in my teenage years. Maybe as kids we thought there would be no challenge in hunting turkey or maybe we really didn’t have the time. Maybe shooting a large, slow, dumb bird (all false assumptions!) that was on the ground didn’t seem as exciting as double-lunging a big buck or kicking up a group of ten roosters on a November morning. I had no idea what I was missing out on.

I took my first Rio two years ago on a cool late April morning while bowhunting with my lifelong friend and hunting buddy Kevin. Our setup was on a hillside a few hundred yards from a giant and lonely cottonwood tree we watched a group roost in the previous night. We took cover behind a piece of farm machinery and I put a lone hen decoy fifteen yards in front of us. You are more likely to find machinery than trees in that area! It seemed the natural thing for the turkey to do after leaving roost would be to feed their way up the hill to a livestock tank. As the sun peaked over the horizon directly behind us we heard them coming out of roost. Within ten minutes they were making their way up the hillside about fifty to sixty yards out in front of us. As they got closer, Kevin began working his slate call and within a few seconds there was a puffed up strutter rubbing up against the hen decoy. He circled around to our side of the decoy and turned broadside. I let the Rage tipped arrow fly and hit just behind his vital area. The bird did a couple of flips and scurried off into the CRP about fifty yards south of us. I quickly made my way to the edge of the field where I saw his head sticking up out of the grass about fifteen yards in front of me. A well placed Rage through the neck and my first turkey was in the bag only a few minutes after sunrise on our first day out. 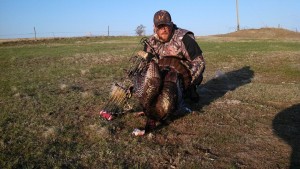 This time of year I think back to that morning and all the time I have spent in the field during my short tenure as a turkey hunter. I don’t know if it’s the challenge of turkey hunting itself or if its everything else… the cool fresh air, the sounds, the smells of spring, or just being in the field among the turkey and away from everything else, but there is nothing quite like spring turkey hunting. Whether you are spot-and-stalk hunting or setting up and calling, you have to engage the predator within you to put a turkey on the ground. So wipe away your tears, dust off your calls, and get your gear straight. Its game time in about ten days!