You are here: Home / Pnuma Outdoors Selkirk All-Weather Jacket – The Last Jacket You Will Need 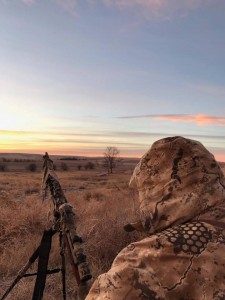 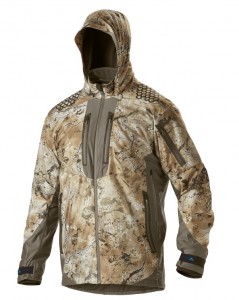 Finding an all-around, good for every situation jacket is extremely hard when you hunt primarily in Colorado and Kansas. If you do your best to live by the “no offseason” creed your gear has to function well through ice cold sunrise hours in the fall, rapidly climbing temperatures in any season in the Midwest, far below zero wind chills, unexpected torrential downpours, blizzards, and more. Now wrap up any and all of those conditions and mix in high levels of physical exertion and sweating and you have the possibility of discomfort at best and a life-threatening situation at worst. After being completely impressed with Pnuma’s Tenacity pants I tested during elk season I was crossing my fingers that Pnuma had put as much thought and work into the Selkirk All-Weather Hunting Jacket. “All-Weather” was the exact definition of what I needed to minimize how much gear I had to haul with me and Pnuma also talked up this jackets’ ability to breath well, wick moisture, and its extreme waterproofing. When the Selkirk jacket arrived (in Pnuma’s usual personally labeled dry bag) I was immediately impressed with how quiet the fabric was and how the jacket was made with an athletic yet roomy fit. The fleece lining was also a nice and comfortable feature that I had not previously found in too many jackets on the market that weren’t thick, bulky, and specifically made for waterfowl hunting. The zippers functioned smoothly and quietly, a zipper was installed over the rib area on either side running parallel with the sleeves which allows access to the pockets of your inside layers and also, as I would find out later, worked well for ventilation. The length of the jacket allowed for the back to come down a little further over the belt line than most jackets which is a great feature to keep frigid drafts from blowing up your back. As with all of Pnuma’s gear the appearance and pattern of the jacket was probably my favorite of any company on the market. Initially the only thing that I saw as a potential issue with the Selkirk jacket was how soft the outer fabric was and that it seemed like a potential magnet for debris. It was so soft that I imagined grass, smashed up leaves, stickers, or anything small and dry sticking to it. I was anxious to put it to the test in various conditions and the fall and early winter of 2016/2017 did not disappoint with a wide range of weather to hunt in.

The first outing for the Selkirk jacket was in October during a 2nd season mule deer hunt. The weather in October was very bi-polar making the deer unpredictable but the conditions were at least great for testing gear! The morning temperatures started in the mid to upper teens and by mid-day the temperatures reached the 60-70 range. Moving through the thick cover and extreme blow down timber during the early morning hours I found the fabric of the Selkirk to be very quiet as it rubbed against branches and was drug over, under, around, and through entire trees. The fit was amazing with no noticeable inhibition to movement at all, almost feeling like it was more a part of me than just a shell covering my layers. About an hour into the strenuous hike I took the Selkirk jacket off in order to test the Pnuma Insulator Vest I had underneath. Up to that point the Selkirk had done a great job as a warm shell, it kept the wind off of me, and to my surprise was not damaged at all after plowing through some very intense blow down.

After the first test the Selkirk was subjected to the worst conditions I could find and it got a taste of everything I generally experience with the exception of pouring rain. I wore the Selkirk during a late season elk hunt the Selkirk jacket managed to 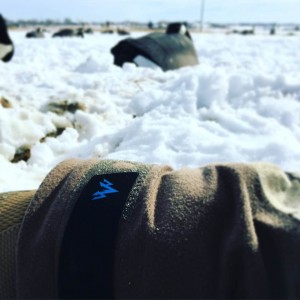 keep me comfortable on a shady, knee-deep snow covered mountainside with far below zero wind chills. With the weather-appropriate layers underneath (all Pnuma gear) the Selkirk performed better than any shell jacket I have ever used. In pure Colorado fashion the sun graced us with its presence later in the day as we were descending a section of the mountain and I was able to push the moisture wicking features of the Selkirk. I intentionally left the jacket on longer than I normally would to test the “moisture vapor transfer (MVT) rating: 120,000” that Pnuma boasts on their website. If you have read my reviews you know I don’t spend much time talking technical and I honestly know only the basics of what this rating means and not nearly enough to discuss it or compare it with other gear on the market.  What I can tell you is this; if you sweat inside the Selkirk jacket it will pull the moisture away from your body like a sponge and will dry quickly, allowing you to stay dry and possibly keep you from getting into a life-threatening situation once the temperature plummets after sunset. I have tested this feature several times while walking endless miles chasing pheasants in Kansas and Colorado, an activity known to make you cold yet sweaty at the same time!

The Selkirk has had many opportunities to show some sort weakness or shortcoming while calling coyotes in sub-zero temperatures, doing field training with my German Shorthaired Pointer in every condition imaginable, and sitting in a goose pit with snow, mud, and water falling all around and on top of me. At this point the only thing I haven’t subjected the Selkirk to is a rain forest monsoon in which it would probably shine as well.

The straight forward and simple way to summarize the Selkirk jacket is as follows; if you haven’t found one jacket that has the ability to function as a shell in a layering system and a stand alone jacket that can keep you comfortable in the elements, you need the Selkirk jacket in your life. Stop buying different jackets for different situations as I have in the past. If you are dedicated to using a layering system this is the jacket for you. I said in my initial impression that my only concern was the possibility of the soft fabric picking up debris. This is the only criticism I could come up with for the Selkirk. After subjecting the Selkirk to the various terrains I did, I can confirm that “stuff” will attach itself to the outside of the jacket. However, I would not trade how quiet this material is for something that doesn’t attract nature crumbs. A minute or two of simply wiping the fabric off with your hand or lint-rolling takes care of this. The fact that Pnuma was able to make something so soft and yet seemingly bombproof is incredibly impressive. After using the Selkirk for a while I can now get rid of several other coats and shells to make some much needed room in my gear collection….for more Pnuma gear! 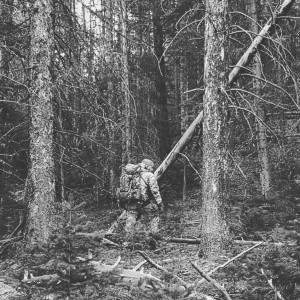