I have always had a “tolerate it or hate it” relationship with base layers. I love the cold and am able to tolerate it quite well, so finding a base layer with the appropriate balance of warm vs. not too warm characteristics is a challenge that no gear has ever really lived up to.  Almost all of the base layers I have tried end up on the way too warm end of the spectrum with a few mixed in that seem to actually make it colder.  Given my dissatisfaction with almost every base layer I have tried in the past I was cautiously optimistic when I read about and ordered the Pnuma Outdoors IconX base layer system (shirt and pants).  The IconX system has what Pnuma refers to as “performance zones” which are designed to provide muscle support and, more importantly to me, temperature regulation and moisture wicking.  When I initially put the IconX shirt and pants on it was immediately apparent that Pnuma was onto something with the performance zone idea.  I could feel and see where the fabric was designed to provide more or less insulation and both pieces felt like they would provide some muscle support based on the design and the various directions and degrees of compression.  The shirt is made with thumbholes to keep your sleeves from working their way up and the pants are equipped with stirrups to keep the legs from creeping up.  I have always liked thumbholes in hunting shirts and the stirrups are something I had never experienced on base layer pants.  Overall I was impressed with the technology and research Pnuma had applied to something as basic as a base layer system.  The IconX system felt like it was tailor made to fit me and was truly the most comfortable athletic-fitting clothing I have ever put on.  I received the base layers shortly before the cold weather (finally) arrived in Colorado this year so I was excited for the temperature to take a significant drop!

Fall of 2016 in Colorado has provided me with the perfect testing grounds for the IconX system. I first field tested the IconX base layers in late October during deer season.  Morning temperatures were in the mid-teens and afternoon temperatures shot up to approximately 70 degrees.  During the low morning temperatures I combined the base layers with the Insulator vest and Selkirk jacket (both Pnuma products), later removing the jacket and eventually the vest as well.  In that temperature range I was never cold.  The IconX system performed as advertised in the moisture wicking department as well, quickly pulling moisture away from my skin and drying fast.  Since deer season I have been “lucky” enough to test the IconX system in temperatures down to 2 degrees with wind chills far below that.  With appropriate layering I can honestly say I was only mildly cold once while glassing from a snow and ice covered ridge at sunrise.  To not sell the IconX system short let me set the scene for you.  10,000-ish ft altitude, sunrise, shady side of the mountain, wind blowing in my face, standing in calf deep snow, temperature when leaving the vehicle one hour prior and several hundred feet lower was 7 degrees.  I opened and drank about half of a 16 ounce bottle of water and put it inside my vest pocket, under my 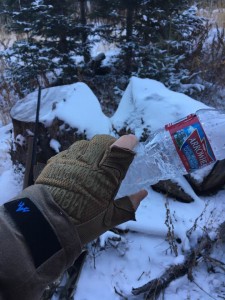 coat.  About five minutes later the bottle that was previously half full of water was now a block of ice.  In those conditions feeling “mildly cold” is perfectly acceptable and far better than I would have fared in lesser gear.

The comfort, balance of warmth and breathability, and quick moisture wicking will make the IconX part of my cold gear layering system from now on. For the rest of my life since that is the Pnuma guarantee!  This base layer system, as a stand-alone in warmer weather or as part of a layering system in the cold, is absolutely amazing.  I would recommend the IconX system to everyone that spends any amount of time hunting, fishing, or training in cool weather. As with anything I test and write about I look for something I don’t like or something that could be improved on.  The product designers at Pnuma make that an incredibly difficult task and after much testing I found one thing to point out. I feel the cuff of the shirt beyond the thumb hole is slightly longer than needed.  When utilizing the thumb hole there is a little more length of cuff tucked into a glove than I would like.  A very minor detail that really has no bearing on the function of the product but could make wearing gloves over the shirt slightly more comfortable.

Simply put my final thought is this; I have found the best base layer system that far surpasses any others I have tried in the Pnuma IconX system.