You are here: Home / Uncategorized / Balance, Round 1 – Anticipation

“Of all the hardships a person had to face, none was more punishing than the simple act of waiting.” 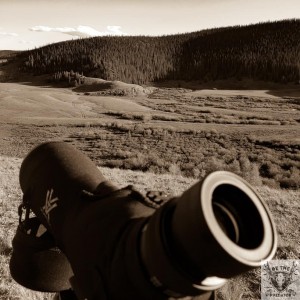 June 5th, 2019, seemed like the longest day of my life.  Every task I completed at work felt like it ate up a huge chunk of the day, but the clock said differently as I checked it several times each hour.  Each year around this time the Colorado draw results for limited archery elk tags posts online, and every year from 2011 through 2018 I could have cared less because I was merely buying points to save up for a special tag.  Over those years I spent countless hours analyzing draw and hunting stats and figured out fairly early in the process, probably around 2014, which particular unit I hoped to one day draw a tag in.  I revisited the stats each year to determine my odds of successfully drawing a tag.  In January 2019 I figured there was roughly a 66% chance of drawing the tag based on how may points I had stockpiled.  Prior to the April 2nd deadline I entered the hunt code for my first-choice tag and hit the submit button.  In retrospect anticipation really slowed the clock down then, but by midday on June 5th I’m pretty certain I saw time go backwards at least twice.  By the time 2 p.m. hit I was out the door and heading home to find out what mountains we would be hunting in September. 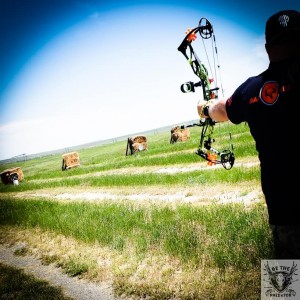 Prior to draw result day my wife, Michelle, decided the occasion deserved something to really amp up my anticipation.  I was instructed not to log on and check my draw results because she would be doing that for me.  She setup something similar to a gender reveal for expecting parents, but rednecked up a touch to create the “draw reveal”.  When I arrived home, a dark balloon filled with colored water was 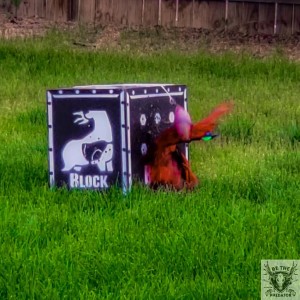 hanging from my Block archery target in our backyard.  Michelle handed me an arrow and told me that blood-red water meant I drew the tag, any other color was a negative.  I picked up my bow, nocked the arrow, closed my eyes and drew back.  I held back at full draw for a few seconds before I opened my eyes thinking about how long I had waited, how much time I spent studying stats each winter, and all the stories I had heard about that unit.  When I opened my eyes, I dropped my top pin on the balloon and squeezed the release.  My arrow blew through the balloon and it exploded in horror movie fashion.  The splash of blood-red water washed away the first wave of anticipation I had been carrying around since April and replaced it with a new level of anticipation that I would carry all the way to September.

Our free time from June 5th until June 21st was occupied with working out, final gear testing and prepping, countless hours of arrow slinging, and a whole lot of map studying and satellite image scouting.  I hung an elk migration map of my unit in my garage and I tried to learn something new every time I walked by.  Sometimes it would draw me in as I passed and I would spend 10 to 15 minutes studying the map.  It was hypnotic.  I had waited forever to hunt there and I wanted every second on the ground to count, not be occupied by trying to figure out where I was or where I wanted to go.  On June 21st Michelle and I loaded up our gear and headed south to see if all the research would pay off during our first scouting trip. 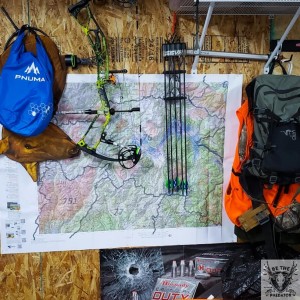 We jumped out of the pickup into the crisp, clean, pre-dawn air at the end of a mountain trail on June 22nd, the first time I stepped foot in my dream unit, to start our first weekend of scouting.  The previous winter and early spring had dumped a historic amount of snow on our area and the spring and early summer had also delivered a ton of moisture.  Just about every inch of ground that wasn’t covered with snow was bright green grass and/or knee-high vegetation and it smelled like the cleanest, freshest mountain air you could ever imagine.  The vegetation was tall enough to make my pantlegs wet up to my knees and thick enough that you couldn’t do anything to avoid it.  In all the miles we have walked in the Rockies I have never seen the ground cover look anything like that.  We stopped to glass at several opening that gave us wide views of the neighboring peaks, valleys, and drainages.  It was basically impossible to find a place where you couldn’t spot large groups of elk if you glassed for 5 minutes and uncommon to walk for more that a few minutes without finding reasonably fresh sign of elk, deer, bear, canine, and/or feline.  Michelle and I carried a fleet of Wild Game Innovations trail cameras with us to setup in spots that looked promising, which basically describes everywhere in that unit.  We setup a few cameras around a secluded shelf with a small pond that I had found during my research.  The shelf was at the base of an “impassable” (later proven false) cliff off the top of a mesa that was about 300 vertical feet and covered with skree, saplings holding on for dear life, and several traversing game trails that would make Sherpas nervous.  Something about the area in general felt special and promising.  Something told me the cameras would tell an amazing story when we came back to check them. 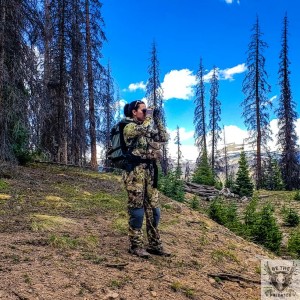 The next morning, I had a target destination in mind.  My friend Garrett Roe had given me some valuable intel for my unit based on his experience the year prior, and we were heading to one of the areas he suggested.  Garrett had described a decent way to get there, however, I found a much more difficult and dangerous way to get there up a drainage, so naturally Michelle and I went that way.  Going up the route we chose would have been tricky and tough on dry ground in ideal conditions.  It was an altitude gain of around 900 feet and approximately 3/4 of a mile from point A to point B (straight line on a map to the top of the mesa).  It was steep, slick with moss, mud, loose rocks, snow, and dead fall, but it was absolutely loaded with sign.  Our route took us through an aspen grove on the way up and every single tree had chew marks and rubs on them.  We passed hundreds of aspens and didn’t find one without a mark.  As we were admiring this and setting up another trail camera along a heavily used game trail, about half way to the top of the draining, it 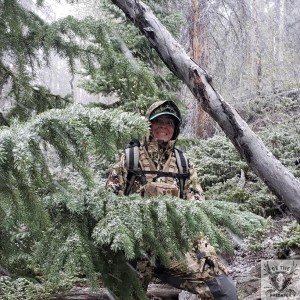 started to snow.  After a few minutes we tarped our packs and put on waterproof shells just in time for the pretty June snow to turn into a full-on whiteout, complete with thunder and a little lightening.  We continued up the now treacherous drainage that got steeper, looser, and increasingly wetter as we approached the top.  After a few sections that required true climbing with hands and feet we reached the rim of the drainage and an amazing meadow-like area just below the clearing at the top of the mesa.  As we stood there admiring what was in front of us the storm broke, the clouds disappeared, and the sun lit up the meadow and the entire mesa.  It was one of the most amazing sights and moments in the mountains I have witnessed.

We worked our way through the meadow on our way to the clearing at the top of the mesa and noticed the insane number of trails through the knee-deep grass, around the still present snow drifts, and over 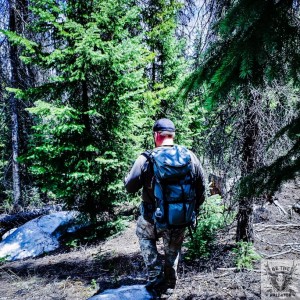 the fallen beetle-kill trees.  Michelle picked a spot for another camera (which turned out to be one of the best we hung) and we made our way to the opening at the top.  I had spent many hours scrolling over the satellite images of the top of the mesa, memorized the topo map, and dreamed about what it would look like in person, and the anticipation came creeping back in as we walked towards the top edge of trees where the mesa opened up.  When we passed the edge of the trees and got our first view of the mesa the anticipation faded away and I felt like we were right where we needed to be.  No series of words can be put together to describe how amazing the view was across the top of the mesa.  At that moment I knew that somewhere on that mesa was the bull I waited all this time to see.  We spent the rest of our scouting day glassing the huge mesa top and committing everything of interest to memory.  The anticipation of the next trip was already maxed out as we eventually packed up and started hiking out to beat the next wave of storms.  Usually the drive home is somewhat of a downer after an awesome weekend in the mountains, but my excitement level was somewhere around that of a kid opening their eyes on Christmas morning… 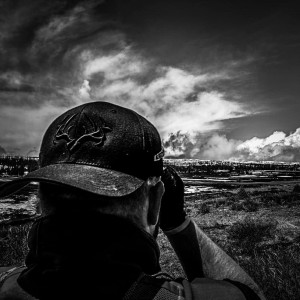