You are here: Home / Uncategorized / Pursuit of a Dream

The pursuit of mule deer is my true big game hunting passion and is tied only by upland bird hunting as my favorite type of hunting period. I took my first muley the first season I was legally able to bow hunt in Kansas when I was 14 and I have been hooked ever since.  When we moved to Colorado in 2010 I was more excited about one day taking a high country mule deer more so than elk hunting.  That excitement was drastically amplified after seeing some of the giant and magnificent ghosts of the Colorado high country while on a hunting trip with my brother and uncle in 2011.  I knew then that I had to hunt muleys in that particular unit; a unit that statistics told me would take around five preference points to draw. I started letting my points accumulate from that point and, in 2017, I drew the tag I had been dreaming of for years.

That particular unit and I have history outside of hunting, going back to the early 90’s and my first mountain camping trip that became an annual family trip for several years thereafter, all the way to a couple years ago when my wife and I did our first overnight 14er hike in that treacherous range. Everything about that area in general feels like home to me, from the small mountain towns below it to the extremely dangerous and often deadly peaks that crown it.  The likelihood of being caught in an afternoon downpour and lightening storm, the snowflakes in July, the explosive thunder ripping down the drainages, climbing above and looking down on the dark clouds with the sun in your face, the hidden lakes in the bowls below the peaks, the dark timber filled with blow down, and the all but impassable “roads”….. everything that likely sounds unappealing to the fair-weather hunter and/or “outdoorsman” draws me to that range. 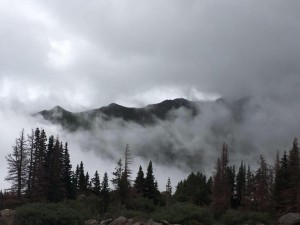 The intense research and planning I put into my quest to fill the muley tag I would eventually draw began far before actually drawing the tag.  Years before.  When I saw the word “successful” beside my tag application on the DOW website I had no doubt that plan A, B, and C were all good.  The scouting trips I took during the summer were everything I had hoped and confirmed every “good idea” I had come up with over the years of planning and studying.  The spots I had either seen before in person or had found via map and satellite image were exactly what I was looking for.  My spirits were as high as the peaks and all that was left was the execution.

Sometimes all the planning in the world cannot prepare you for the x-factor. In this particular could-have-been-epic hunting tale, that variable is a reoccurring (in my case), excruciating, and sometimes crippling foot injury; something so painful that it can bring the strongest person to the ground in one step.  This began to flare up before I drew my tag and was something I was determined to push through.  As my final scouting trips in August came around the pain was unbearable and I began physical therapy.  One way or another I was going to push myself as far as necessary to accomplish my goal.

I limped into the mountains the day before season opened and worked my way a few miles into the backcountry to glass an area I suspected held something special. After finding a good glassing point and setting up I began to scan several hundred feet above me.  There I found what I had been dreaming of for years; an extremely well hidden, upward-sloping shelf a couple hundred feet below the peak.  I wouldn’t have been able to find this shelf if it weren’t for the one average sized buck that stood up and stretched briefly.  “Average” is based on the totality of the group which I would see over an hour as they took turns standing and moving about and there was nothing “average” about the first buck I saw in most settings.  The other bucks in this group were absolute high country giants.  No doubt this was the most impressive group of mule deer I had ever seen, and they had picked one of the toughest spots on a mountainside a person could ever imagine getting to.  I tried to ignore the pain rushing through my foot as I packed up my gear and headed back to camp with a plan in mind. 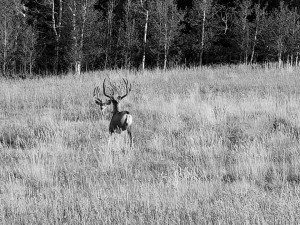 The few miles I had hiked in took at least three times as long hiking out. By the time I got back to camp I knew in my head, as I stood on one leg, that I could make it to the shelf of giants I had found.  However, I also knew that my ability to pack out a deer from that location, or any location, was very questionable given my injury and the extreme location of the shelf.  I would never disrespect such an amazing animal by irresponsibly harvesting it in a location where I couldn’t pack it out with little to no waste.  Anger, rage, feelings of failure, and a thousand different emotions poured over me as I accepted defeat.  I made a few other trips during the archery season but each time my inability to maneuver the rough and unforgiving terrain sent me home with an unpunched tag.  To say I was angry would be an understatement.

Now that the dust has settled, it would be inaccurate to say I am disappointed with my 2017 archery season. Sure, I didn’t get to fill a tag I waited 5 years to draw, and yes, it sucks to know where a group of monsters lived and not be able to take one, but no time in the field is time wasted.  I got an opportunity to spend quite a bit of time in an area that is very special to me, both during the summer scouting months and during the season.  I got to experience the unpredictable summer storms, standing above and looking down on the clouds as they rocked the valley below me, and the solitude of a place so far removed from civilization that you truly feel alone.  I also found something that the 90%, the stereotypical “hunters”, who never venture more than a few hundred yards from the road will never likely find.  I found and observed the biggest and wisest bucks on the mountain in their almost invisible comfort zone.  A place so far removed from where most sane people would consider going that I am confident it will remain a very special spot for years to come. 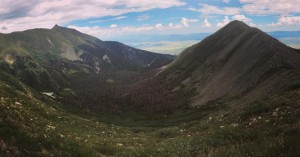