My first hog hunting experience was mid-March, 2014, when two co-workers and I made last minute plans to do a three day hunt in Texas.  I had heard of a place called Rustic River Ranch (www.rusticriverranch.com) near Childress, Texas, so knowing nothing about hog hunting I gave them a call, not long after we were hunting through a three day Texas sandstorm and enjoying every second of it.  We left with a cooler full of fresh pork and a new found love for hog hunting.  It didn’t take long after returning home to begin planning the next trip to pursue Texas hogs.  By the end of June we had assembled the next group of friends, family, and co-workers and booked our next trip to Rustic River.  Before we knew it February had arrived and we were heading south in the middle of the night for another round of hunting the ugly, destructive, and tasty critters. The trip began in Denver with Tim (a co-worker and veteran of the 2014 sandstorm hunt), and co-workers Lance, and Nate.  By 11:45 p.m. our gear was consolidated in two pickups and we were on the road to Rustic River with a quick stop in Kansas to pickup my brother, Travis.  While working our way through Southwest Kansas we enjoyed a breakfast with the creepiest group of customers and employees at an unnamed house of pancakes.  Chances are our photos are posted at the entrance and we are not welcome back after Tim accused the cook of putting mayonnaise in his omelette and insulted poor Christopher, the mathematically challenged waiter.  After departing the fine pancake establishment we managed to get all the way through the Oklahoma panhandle and Northwest Texas without offending anyone.  We arrived in Childress around 11:00 a.m. and met up with the final member of our hunting group, Casey.  Casey had made the road trip from Alabama to partake in the redneck festivities.  The final 20-ish mile drive Southeast from Childress goes though some fine hog and coyote hunting terrain which is apparent by the abundance of elevated blinds and feeders in the fields.  A good portion of the land is something similar to pasture, but it is full of some of the nastiest thorn filled scrub brush and cedar trees I have ever seen.  We took our time driving most of the way to the ranch and enjoyed the lonesome Texas back roads with the windows down and the fresh air coming in.  Although Tim and I had only been to Rustic River once before, when we arrived at the turnoff and entered the property it was like returning to somewhere special and sacred that seemed a little like home.

When you arrive at the Canyon House at Rustic River, it appears to be a standard large metal building commonly used by farmers and ranchers.  The outside appearance makes going through the doors that much more impressive.  The inside of the Canyon House is the lodge every hunter would die to have with deer, elk, bobcat, and game bird mounts gracing the walls.  It is the perfect balance of man cave hunting cabin and modern home that really makes you feel at home.  The bedrooms are filled with log style bed frames and some of the most comfortable mattresses you will ever sleep on which would make getting up early in the morning hard if the property wasn’t full of hogs, yotes, deer, turkey, and bobcat.  If the Canyon House doesn’t seal the deal and make you feel at home, the hosts Dave and Dell certainly will.  They are two of the friendliest people you will ever meet, they will do anything to make you feel at home and make your hunt successful.  The food at Rustic River is worthy of its own write up altogether, so let’s just sum it up as some of the best meals and desserts you will ever eat unless you don’t like venison, fresh pork, pizza that you assemble and bake in the coal fire oven yourself, and general goodness that will remind you of your grandma’s kitchen.  There is really no way to truly describe the lodging and staff at Rustic River and do it any justice, you just have to experience it for yourself. Most of the hunting at Rustic River is done from the various blinds situated around the property.  Anyone that has ever been hunting with me knows how much being chained to a stationary blind drives me nuts.  The blinds Dave has built/setup on his nearly 400 acres are the only blinds I can actually stay in for a long period of time without losing my mind because the setups are so perfect.  There is a reason behind the location of each blind.  They are located on the edge of bluffs or high vantage points overlooking fields with feeders and bait piles for predators, near water sources, and/or near game trails that are always loaded with fresh tracks.  No matter what your style of hunting, weapon of choice, or target animals, there are several blind setups perfect for you. In all the time I have spent coyote calling I have never heard so many large packs of coyotes vocalizing from so many positions around one piece of property, and continue to do it for so long.  The first night Travis and I setup together in a large blind overlooking a wheat field.  The yotes were singing all around us.  I ran a couple of call sets after dark and we kicked on the spotlight (legal in TX) to find a set of eyes checking us out from about 250 yards.  I turned the spotlight off for a second, turned it back on and just about the time Travis was about to let a round fly the old spotlight finally took its last breath and died!  Note for next time, use the lights the ranch provides.   On the second night Travis, Lance, and I sat a blind together.  About 30 minutes before dark the coyotes started howling in almost every direction and continued to howl  with only a few breaks until we returned to the Canyon House at 10 p.m.  At the end of the trip we ended up with one yote down (Tim’s fine work on our last morning), one that got away because we used an old light, and one that Nate shot at and missed the first morning as two yotes passed through the field in front of him.  If you are looking for a predator hunt there is no shortage of them to be found in the area.

I really enjoy hunting trips where you experience “firsts”.  I have never witnessed a forty pound pig try to take a grown man (sort of….Nate is a little fella) out at the legs until this particular excursion.  Nate’s version may be something like a giant rabid boar came after him and tried to pull his card, but it was really a startled ham with legs going for his ankles as it attempted a getaway.  It was really hard to acquire a running target the size of an obese chihuaha in my crosshairs with tears of laugher clouding my vision, but Tim and I shot at the same time (not sure who or if both hit it) and put him down while Nate was screaming something about vengefully eating the little guy.

The largest boar taken this trip, weighing in around 170 lbs, was by far the toughest pig I have encountered so far.  After a few well-placed rounds from Travis and I knocked him down, he stood up and began charging back at us.  I put an additional two pistol rounds to actually put him out.  He was the first pig with cutters I ever shot so he will forever be immortalized as a European mount in my house (Michelle is really excited).  Two other hogs didn’t get a chance to charge after being taken down with well-placed rounds from Tim and Casey on the second day.  At the end of the trip there were five hogs taken, although one was not fit for processing and eating due to a previous encounter with some sort of predator that tore him up pretty good on the back half.  The fine fellas at S&S Redneck Enterprises (I couldn’t make that name up) made quick work out of processing the hogs for us and had them ready by the time we departed on day three.  S&S is not what you picture when you think of a game processing place, but theythey are some of the friendliest and most helpful people you will ever meet, and they make some of the best sausage and jerky you will ever taste.  On a side note, Steve at S&S did pass on some valuable information to us hog hunting newcomers.  Apparently feral hogs grow a thick gristly-like layer between their skin and ribs that can extend from the front shoulder all the way back to the rear shoulder that acts as a defensive shield.  This will be taken into account as I build myself a hog slaying rifle for next year.

Over the years I’ve had some trips that I was glad to put behind me and forget.  Neither trip to Rustic River has been anything like that.  As I left both times I felt like it was something I would always remember and I looked forward to going back.  It seems that the trip was a big hit with everyone as Nate already had Dave block off a period of time for our return next year and we are considering adding a day or two of hunting to the trip, assuming they can handle us for that long.  Next time we will take better spotlights, night vision, various coyote calls to change up the call sets, and a sack breakfast for Tim so he doesn’t get us into a tussle over mayo! 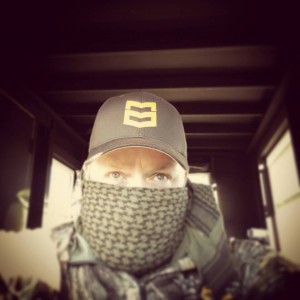