You are here: Home / Uncategorized / Caught in the Act: The Tale of Floppy Ears 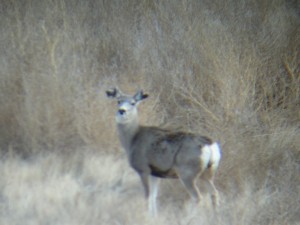 Covered in dirt and sweat, your muscles are burning as you continue a painfully slow and grueling stalk that has taken you several hundred yards through a CRP field or along a creek bed. The buck you have been watching grow for years on trail cam pictures is now one hundred yards ahead of you, just out of range, but unaware of your presence as he grazes about with a couple of doe and a smaller buck. The wind is in your favor, thanks to the careful consideration you have put into camo selection you are almost a ghost among the tall grass and ground cover, and you have practiced so thoroughly over the off season that you are completely confident in your ability to stick a double lung shot at 50 yards. Everything about your stalk is absolutely perfect until………….you see a familiar set of eyes locked in on you, burning a hole through your soul, your pride, and your game plan. You might as well stand up, wave and walk the other way. She is………Floppy Ears the scout doe.

I don’t know if this is a common phenomenon that everyone has the displeasure of experiencing or if our experiences are particularly unique. Sure, everyone has been busted by one cunning doe in the group that just happens to see you blink and immediately takes off into the sunset taking the whole herd with her. Sometimes it’s a little buck that just happens to see you looking around with your binoculars and takes off like Forrest Gump after he got smacked in the bean by that rock, taking Jenny and friends with him to the “No Hunting” ground next door. But has anyone ever experienced the exact same deer spotting you every single time you get busted while executing any otherwise flawless stalk that would make a mountain lion jealous? Maybe it is always the same deer in each herd every single time someone gets busted and we are just lucky (unlucky) enough to have a doe with unmistakable features acting as the scout each time. We first saw Floppy Ears show up on camera in 2011, and she has been building a reputation, similar to that of small pox, ever since. Unlike most bucks, it’s usually pretty hard to differentiate one doe from another. Usually. Floppy Ears has features similar to that of some dog breeds, large standing ears that fold over forward a few inches from the top and flop up and down as she moves. Maybe deer with strange or different ears are banished from any roll in the herd other than standing around and trying to ruin a hunters’ day. If so, Floppy Ears has mastered her duties.

In the three years Floppy Ears has been hanging around, she has busted us sitting in what seemed like well hidden spots, checking cameras, and making what seemed like well planned stalks. A few weeks back I was sitting on top of a hill in my pickup spotting the property I was hunting from a ways away. Off to my left from the hilltop was a steep bluff, probably one hundred feet high, with a creek bed surrounded by a large patch of CRP. As I was glassing the property in front and back to my right, I happened to get out, quietly and slowly walk to the edge of the bluff, and take a peak in the field below the bluff. Looking from left to right I saw the following: creek, tree, tall grass, tall grass, tall grass, two eyes and set of stupid looking floppy ears, tall grass, tall grass. She was a good 400 yards (line of sight) out and in the bottom field. If you were to walk down to where she was and look up to the top of the bluff, you would never see where I was looking down from. I know the view from there because I have been down there. The other six muley doe and one buck that jumped from the grass on either side of her had not noticed me either. All they knew is that she took off like she just stole something and they must be accomplices to the crime. She busted me when I didn’t even want anything to do with her or the rest of her group, most likely to spite me. Just another victory notch for Floppy Ears.

Every attempt at spot and stalk hunting has a unique variable that challenges your game plan. Maybe the wind isn’t exactly in your favor, maybe there is nothing between you and your trophy buck but a few dirt clods to use as cover, or maybe there are so many sets of eyes on you that merely breathing is enough movement to scare off the whole herd. Maybe that variable is an obnoxious doe with funny looking ears that always seems to know your whereabouts and takes sinister pride in making you look foolish. The real test of spot and stalk hunting is being able to recognize the variables working against you, address them, and overcome them. Don’t think Floppy Ears wins every time, sometimes we can surprise her and beat her at her game. Eventually Floppy Ears will be defeated permanently, just as soon as we can get close enough to her for a shot……….