You are here: Home / Uncategorized / Symmetry and the X-factor
“There is no decision that we can make that doesn’t come with some sort of balance or sacrifice.”
-Simon Sinek 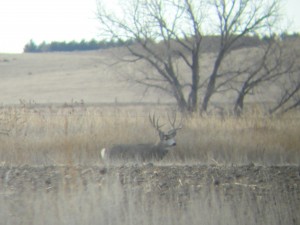 In the pre-sunrise hours of November 29, 2014, I was quietly walking across a soft drilled wheat field towards a small locust tree on the bend of a creek.  The property around the creek is low in a valley with a few hills here and there, mostly near the property lines.  I arrived at the locust tree and sat down facing southeast towards a hilltop with a fence running East/West along the top, drawing a line between the property I could hunt and a thick CRP field that I could not hunt on the other side.  I suspected one muley buck in particular was using that field as his bedding area and also that he was roaming the valley in the mornings.  I anxiously waited for the first crack of light and plotted the possible scenarios I could be presented.

As soon as a slight glow from the rising sun was visible, I was glassing the horizon lines.  It was still blackout dark below the horizon line and in the valley bottom, but my Nikon binoculars are excellent during extremely low light and within seconds they treated my  to the silhouette of the buck I was looking for.  This was the first time I ever saw him through magnification, and I could immediately tell that he was a shooter.  Symmetry is the best name he could be given as is apparent by the photo.  He walked the fence line to the east for about a minute before he cut straight north, his thick neck held his head and heavy rack low as he disappeared below the horizon line into the black.  I immediately grabbed my bow, attached my Heads Up Decoy (HUD) muley doe to the bow mount, and cut straight north across the field I was in about 200 yards to a spot where the horseshoe-shaped creek came to a bend.  I moved quickly and quietly under the cover of darkness through the soft field and took a kneeling position on the edge of the creek.  Within a couple of minutes there was enough horizon glow to clearly glass across the valley bottom.  In a pasture several hundred yards to my east I saw the monster now pushing a single doe back to the south, again moving right along a property line dividing where I could and could not hunt.  He continued to push the doe south until they were both at the corner of the CRP field I was initially looking towards.  A small 3×3 muley approached from the east showing interest in the same doe, but after a few crashing blows from the Symmetry’s rack the smaller buck decided to seek entertainment elsewhere.  Symmetry and the doe crossed over into the CRP field and disappeared just beyond the property line, moving towards the west.  I knew this was my chance to cut some distance between where I was and where I suspected they were heading, so I moved quickly back to the south to meet up with a nice crossing spot in the creek.

Within a few minutes, I had moved back across the field to the edge of the creek.  I was using the waist high weeds along the creek bank as cover while I tried to get to the crossing before the buck came back into sight.  It was quickly apparent the pair had picked up the pace as they crested the hilltop, walked down the property line, and settled into a thick bedding area directly south of me and just on the side of the property I could hunt.  This forced me to finish the last 50 yards to the crossing on my hands and knees.  I crawled the distance as quickly as I could and took a peek through my binoculars as I reached the crossing.  The shiny tips of his rack were just barely visible above the tall weeds they were bedding in about 300 yards south of me.  I hurried into the bottom of the creek crossing, checked my equipment over one last time, and began what was sure to be a long army crawl to the spot I hoped would be this bucks last bed.

The dirt I was now slithering through was very soft, but also very dry and dusty.  Every move I made seemed to stir up a little dust cloud, so I was forced into what seemed like a slow motion army crawling through the field along the creeks edge.  As I inched through the field, I held my bow in front of me with an arrow nocked and the HUD in place, just in case Symmetry and his new friend decided to look my direction.  Every time I moved to a kneeling position to take a look around, both deer would look at the HUD but didn’t give it a second thought due to its almost scary-realist appearance.  I was well into the first hour of my crawl through the field when I heard a familiar sound coming from the creek bottom to my right and behind me bit.  This was the sound of bone crashing and rubbing in brush, along with the stomping of hooves and angry snorting.  Although I couldn’t see it I knew that another buck, from here on known as X-factor, had made his way down the creek bottom from behind me which during the rut didn’t seem that strange.  What was a bit concerning to me was his intentions.  Had X-factor watched Symmetry and the doe bed down and decided he was up for a fight, or had he seen the HUD slowly moving along the creeks edge and developed googly eyes for the life-like doe attached to my PSE?  Within what seemed like seconds, my target buck and his doe had moved towards me along the creek, looking beyond me and towards the source of the sound.  When they were about 100 yards in front of me and closing, they immediately stopped after a particularly loud and angry snort blew out of the creek bottom.  It sounded like X-factor was about 50 yards to my right in the creek bottom.  I seemed to be in the middle of something that was about to turn exciting and violent, especially if X-factor had visions of bounding off into the sunrise with the HUD attached to my bow!

The introduction of an unknown variable to an otherwise well thought out and executed plan can be either spectacular or devastating.  While executing a well thought out and executed stalk, I decided that X-factor was worthy of my attention.  I moved into a squatted position, took a hard right, and moved towards the creek into weeds that were over the top of my head.  Symmetry and his doe watched the HUD move towards the creek and immediately retreated back to their original bed near the south property line.  I made my way to the creek and my pride sank to my feet as I found nothing but tracks in the bottom.  I had a sick feeling about me as I pondered why I let an unknown pull me off my target.  I could see that Symmetry and the doe were again bedded down in their original bed, acting as nothing had happened.  I moved down the creek bottom towards them, popping up occasionally to take a look.  The last time I crawled up the edge of the creek they were both standing, the doe watching intently towards the farm to the south as the neighbors tended to their cattle.  After watching for a few minutes, the doe decided she had enough excitement and slowly walked off to the southeast with Symmetry following directly behind, over the fence and out sight.  My stalk was over.

After the agony of defeat fades there are many questions and (hopefully) a hard lesson learned.  I will never divert my attention towards an x-factor again when I have a trophy right in front of me.  At least I was able to get a few pictures of Symmetry during my stalk and I have a little time left for redemption before the season ends.  If I ever get a chance at Symmetry again, he will receive the attention and respect he deserves!