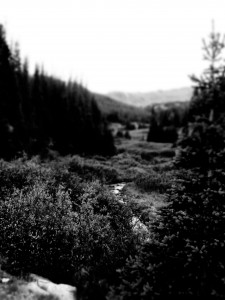 We hit the road on the morning of Friday, September 25th.  This time around my brother, Travis, came along which was a nice change after spending a week in the mountains solo on my first hunt.  If you have experienced a road trip as part of their hunt (ours was about 4 hours this trip) you know that the trip is one of the best parts of the hunt and always part of the memories that never fades.  We discussed the various spots I had been during my first hunt, ideas and possible tactics for this trip, ideas for future hunts, and of course memories from previous hunts that are always part of the conversations that never get old.  If you don’t have these memories that you share with your hunting buddies every time you are together, you are doing it wrong!  With the exception of one stretch along the way that is sort of spread-out-trailer-park-meets-barren-dessert, the drive went by pretty quick and we arrived at camp.  The anticipation was too much to bear so we put off setting up camp and instead geared up and hit the mountain in hopes of setting a late afternoon/evening stalk. 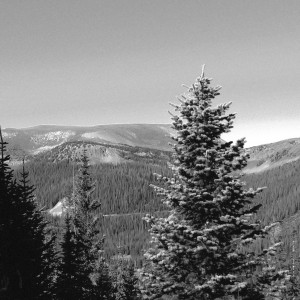 The spot we decided to hit first was one I had not been to previously but suspected it was worth checking out. A closed off logging trail lead up a long valley into a large bowl closed off by several peaks and streams running from various directions through the bowl and down the valley.  This area offered a bit of everything: high tundra, aspen groves, pockets of thick cover, drainages filled with green grass, large patches of berry covered brush, streams, ponds, and meadows.  We slowly and quietly worked our way up the valley and glassed the drainages and meadows along the way.  The elk sign was plentiful and the human sign slowly vanished as we got a few miles in.  We had worked our way up to where the valley widened out and opened into a giant bowl about the time the shadows of the late afternoon fell into the bowl.  A distant bugle came from the far East side of the mouth of the bowl, at least a mile across from where we were, and we knew we had picked the right spot.  Finally!  Another bugle followed across the bowl from the South side and also sounded like it was quite a ways off.  We stopped and took in the screaming match of East vs. South for a moment when a much closer bull ripped off a deep, throaty, raspy bugle above us to the West.  A few seconds later we could hear his cows quietly talking and he let out another bugle.  He was getting closer and sounded like he was switch-backing down the bowl.  The East and South bulls continued to antagonize from their distant positions and the big guy above us continued to rip off the angriest bugles you could imagine as he continued down the bowl.

As the three way shouting match was going on we worked out way into an area at the base of the bowl where the trees were a little less dense going into much thicker forest above us and in front of us. We took up a spot behind a small group of trees with the idea of figuring out his direction of travel and cutting him off.  I had just nocked an arrow and ranged a few landmarks (in case we got really lucky from that spot) when a bugle came through the trees so loud and angry that it caused an adrenaline burst, probably originating within 50 yards or so above us where the trees got much thicker.  We could hear the elk moving through the trees above us as the bull to the South let out a loud bugle.  The next bugle that came from the closest bull indicated he took a hard right and was making tracks towards the smack talk coming from the South.  All of this happened within a minute or two and we couldn’t get a good read on his direction in order to cut him off in the thicker trees that surrounded us.  By this time the light was quickly fading behind the mountains as we quickly worked our way to the South hoping to catch a glimpse of the bull that just made our ears ring.  His bugles faded off up the bowl to the South as we came to a large meadow at the bottom of a drainage as the last glow of sunlight disappeared behind the peaks, leaving behind only falling temperatures and a missed opportunity.  After layering up for the falling temperatures and grabbing a quick snack we began the hike out of the bowl.  For all intents and purposes, this was basically the first season I was able to truly plan, scout, and dedicate enough time to bowhunt elk with any chance of success.  Since I moved to Colorado and got back into bowhunting, I had only been able to get out for a three day weekend the previous two seasons as hail mary type hunts with no real scouting or chance.  I told Travis as we hiked out of the dark bowl that those few moments we had just experienced were worth every second of scouting, studying, working out, and practicing. 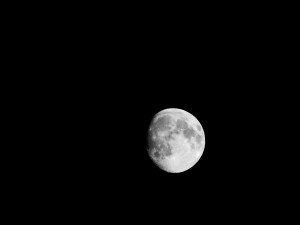 As we returned to camp around 8:30 p.m. the sky lit up with the brightest moon I had ever seen. It was the weekend of the blood moon and the lunar eclipse.  The peaks around us were glowing bright like the sun was permanently stuck at mid-rise and every feature, from the tallest trees the smallest boulders, were as clear as mid-day.  We refueled, rehydrated, and recapped the evening’s events with constantly growing anticipation of what the morning might bring.  We hit the sleeping bags as quickly as we could, knowing the morning would bring another chance to find the screaming monster that escaped us earlier.  As I laid in my sleeping bag trying to fight the shoulda-woulda-coulda’s out of my head, I couldn’t help but notice it seemed to be getting brighter outside.  As the night progressed the moon got brighter and brighter to the point it seemed someone was parked outside the tent with headlights beaming directly at us.  I knew the bright moon and the fairly mild temperatures meant the woods were probably alive with movement all night and wouldn’t help our cause much, but I drifted off to sleep optimistic. 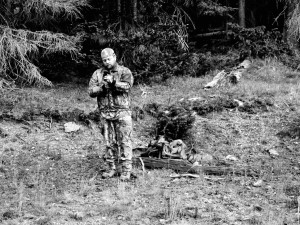 The next morning after the moon finally disappeared and cast a short period of darkness before sunrise we were making tracks back into the bowl. Our plan was to reach the bottom of a meadow that stretched from the bottom of the bowl to timberline below the peaks to the West by sunrise.  This meadow was about one hundred yards across with a nice stream running through the middle and thick trees on either side.  Travis and I worked our way up the North edge of the meadow, constantly stopping and glassing the area for any sign of life.  As the sun peaked over the horizon a slight breeze began drifting through the meadow and the already low temperature seemed to drop about 10 degrees.  We continued up the meadow, finding sign all along the way, until we discovered a brush covered knob in the middle of a drainage about one hundred feet below tree line.   The knob offered great views of the entire bowl and perfect concealment.  Since we hadn’t seen anything other than sign the whole way up, we decided to setup in the shadows of some larger bushes and glass the bowl for a while in hopes of spotting our ghostly friend and his herd from the night before.  As luck (or more like un-luck) would have it, the weather stayed consistent with the earlier part of my season and the temperature shot up not long after we took up our position.  By 9:30 a.m. it was a cozy 60 near treeline.  No, that’s not a typo!  As t-shirt weather set in we decided it was time to move on.  We stood up, Travis on the right side of the knob, me on the left, and immediately heard hooves pounding the ground and moving downhill.  Travis caught a quick glimpse of the rear quarters of a lone elk rushing into the trees below us.  Somehow the loner had snuck up to the right side of the knob in the drainage without either of us seeing it and was apparently surprised to see two humans baking in the September sun.  With no sign of the loaner or any other elk, we hiked out of the bowl in hopes of finding somewhere cooler to search for elk. 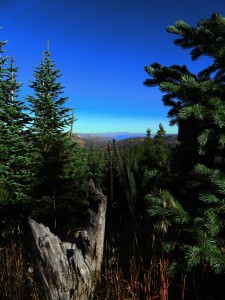 After glassing several different locations through mid-day and into late afternoon with no sign of anything, we decided to work our way down an old logging road that stopped at the edge of a drainage I had seen elk in during my first trip of the season. There had been lots of sign my first time in the location as well as a large wallow in a wide grassy opening at the bottom of the drainage.  Travis and I hiked in and got to the opening about an hour and a half before sunset.  The wallow had since dried up and there was no fresh sign to speak of.  With no time to move to a different location before dark we settled in, hoping for an unsuspecting elk to wander by, and watched the curtain close on the last evening of my 2015 elk season.

Many people have unrealistic expectations and distorted views of hunting. Non-hunters, anti-hunters, some new hunters, and fair weather road hunters probably all have similar visions of how hunting happens.  Maybe they imagine driving down a trail, seeing an animal, jumping out of the vehicle, taking a shot, taking glory photos, and going home, with no real concept of the actual work that goes into ethically filling a tag.  Maybe this method works for them on occasion, but it’s not the method most of us would choose.  We have all experienced hunts and/or seasons where we never even saw the deer, elk, pheasant, bear, or whatever it was we were in pursuit of.  To me it was a gift just to be in the mountains looking for elk.  It was a gift to be able to go on one summer scouting with my wife and a second one with my brother, to go on my week long solo hunt where I was all but skunked, and to go back out for a few days with my brother and hear the elk screaming their heads off.  Am I content with looking at an unfilled tag?  Not even a little.  Tag filled or not, I will train harder, study more, spend more time scouting and shooting, and go back out more determined than ever.  There is no finish line in this game.

Key equipment for this hunt included the following: